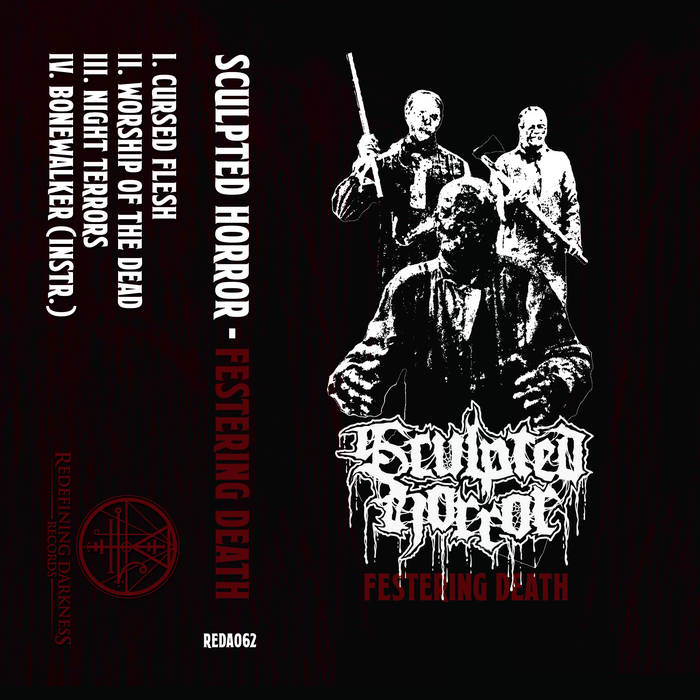 666david_bathory just ordered the Festering Death Cassette and I gotta say, every track on here is fucking phenomenal. I can't wait to hear more!

activa44 This is a really nice horror-death metal one-man-band!

Sound is raunchy and mouldy, the bass is loud and clanky, the vocals cavernous and riffs/drums sometimes convey a feeling not unlike that of good ol' Repulsion and their punk influences, although while being closer to Obituary in writing and execution!

tank_06 Tim Rowland... what up you twisted fuck!
I been snappin' my neck to your grotesque Festering Death.
I'm sorry I slept on your demo before... I just saw it again and had to get it. Fuckin' love that instrumental Bonewalker track on there now. Damn u go hard.
This is some gloriously rotten old school shit I highly recommend yo. Favorite track: Night Terrors.

"Bound to cause spontaneous bouts of head-banging, Cursed Death seeps into the brain matter. Worship of the Dead and Night Terrors are utter savagery, the latter in particular showcasing a heaving set of drums and echoing vocal style that buries deep like a tick.
Finally it’s the instrumental Bonewalker to wrap an excellent release. Even without the vocals, the intensity is still at 11. This is a death metal instrumental track, allowing the nuances of the guitars to lead and control. Bloody brilliant."
- Games, Brrraaains, and a Headbanging Life
www.gbhbl.com/ep-review-sculpted-horror-festering-death-redefining-darkness-records/

" I am compelled to say that this was a full-throttle thrasher, the soloist certainly outdone himself him & compiled a brisk yet pummelling pounder that is definitely worth the listen – persevered with talent & overarched with ominously salubrious brutality…a must listen!"
- Metal Temple
www.metal-temple.com/site/catalogues/entry/reviews/cd_3/s_2/sculpted-horror.htm

" Sculpted Horror is the old school death metal band founded by Tim Rowland.Festering Death is the debut demo featuring four tracks of heavy old school death metal.The guitars are played with a mix of mid paced heavy guitar chords and some crazed,faster guitar patterns added throughout the songs.The vocals are low,deep death metal growls that fit Sculpted Horror's musicial style perfectly.If you are a fan of Autopsy, Demilich and well written and performed death metal do yourself a favor and pick up a copy of Festering Death today."
- Winter Torment Zine
wintertormentwebzine.blogspot.com/2019/07/sculpted-horror-festering-death.html

Not much is known about the entity that is Sculpted Horror. What we do know is that this is wonderfully crafted old school death metal from Athens, GA founded by a gentleman named Tim Rowland.

The band self-released their debut demo, Festering Death, in the form of a limited edition cassette, and not only does Redefining Darkness have copies of the original pressing, but we are also re-pressing the demo with an additional instrumental bonus track "Bonewalker". There is a strong Finnish element to the music reminiscent of seminal bands such as Demilich, Abhorrence, Demigod, and Sentenced (early) and it's some of the more exciting and promising Death Metal from the U.S. - we are excited for what the band do next. For now enjoy Festering Death!

Bandcamp Daily  your guide to the world of Bandcamp

Cannibal Corpse's George "Corpsegrinder" Fisher stops by for an interview